The Falconer duel was cool. Predators are not invincible, and definitely not to a Katana.

To be fair though, Royce just about got skulled. If Isabelle’s venom hadn’t worn off, they would both be dead. The entire movie hinged on the fact that the shit doctor kept an expiring sample of venom of the scalpel.

I started playing again to try out the new maps and the game feels back to normal again, when the perks were new I felt like the fireteam was a bit op, being able to deplete your entire health bar in 5 seconds, but now I can end them or they can end me at a speed similar to how the game used to be 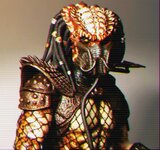 I had 3 predator matches today, the first as the CH was ok managed to kill two but knocked all of them out a few times, second was terrible, played as JH and I killed one but a couple of bad decisions led me to self destruct. But the last one was good, I played as my Samurai predator build and I tried to make the katana my main weapon but it really did not work at all, the thing is too slow and the hit box felt glitchy. The real issue was that all the players were very tanky, all support and one Dutch so I had to wear them down with the handheld plasmacaster and using the katana only once in a while to finish them off, they all died but gave a good fight

Game is just too easy on both sides. It has bored me to tears the last few weeks. I finally put it down. Sad to say, illfonic is too stupid to retain a player base. With two massive sales, on different platforms, the game is still hemorrhaging players like a stuck pig.

The game is on life support, until they get their shit together. The amount of bugs has increased since the last update and it’s only going to get worse, now that their focus is divided between at least two different games.

Ever since I noticed how converged they are I don't expect them to do any better than what they have already done. I actually expect their content to keep getting progressively worse

I probably keep playing it mostly because I don't spend that much time with this game, I mean I'm not even level 100 yet so that gives you an idea

Yeah, I was 150 within 25 days and that was with me taking my time here and there. Could’ve gotten it much sooner than that. The game has gotten progressively more boring. The better you get, the easier the wins become. On both ends. It’s very, very rare to fight a good Fireteam or a good Predator anymore. And the bugs are horrendous now. Not to mention, they don’t seem interested in adding anything besides maps and characters.

Every once in a while you get an immortal team that somehow can survive 20 plasmacaster shots to their face. It's borderline suspicious, I actually saw a team ask for reinforcements twice. I got to kill two again but two left.

As always, games are fun when they work properly, when stupid and convenient bullshit happens it just makes me want to break something. Also I'm sure I found a team with at least one player that had a lag switch, I wish I could find these pieces of shit irl to punch them in the face

That’s why I tend to play Elder Stalker. It’s difficult for anyone to survive his plasma charges.

Yeah, that perk would be excellent for the Jungle Hunter because with the game as it is now you really can't do enough damage with the plasmacaster alone to eliminate a full team especially if they are all support, it sucks because it kind of forces you to use weapons JH didn't feel like using, not a big deal in reality but it does annoy me

Now that the game is free on PSN it's fun to play again, worth getting it now @Snake Plissken

Jotaro Something said:
Now that the game is free on PSN it's fun to play again, worth getting it now @Snake Plissken
Click to expand...

It's free now? I'll give it a shot. I've considered getting that new Aliens game as well.

Snake Plissken said:
It's free now? I'll give it a shot. I've considered getting that new Aliens game as well.
Click to expand...

It’s fun. A bit simple at times. I had to turn off the kill notification icon. Shit was annoying.

Wish it was: a) fairly priced in Steam; b) had actual Steam playerbase.
I mean, what did they expect?! Freaking idiots...

I’ve already stopped playing it. Mostly because the group I had stopped and playing with synthetics on the higher difficulties loses all cool points the feature has, because they’re bumbling idiots. Ransoms are just as dumb.

If you’re talking about PHG, the game can’t be saved. It has too many problems and the developers are fucking morons.

Finally I got a trophy that is worth a damn, and it only too 70 million tries 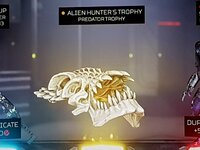 Dealing with the field lockers is literally not worth your time, it makes sense to make the good stuff rare but they overdid it. After this I finally got to the point where I'm done with this game, I won't play it again unless Wolf is added as DLC, it was fun but this shit gets old fast

Besides that, there isn't much to it, same shit over and over again. These kind of games are not meant to last unless they get new game modes and we're not getting that

Yep. That 2v6 would’ve been great. They’re too stupid to realize that. Or make it work. Or both.

At least in their F13th game (which wasn't amazing to begin with) we had much more room to mess around and have fun, especially considering there was always a chance one of your friends might end up being Jason.

I don't understand how this "Predator" game is still going. It's very repetitive, punishing and grindy...

Darth Maul said:
the game can’t be saved. It has too many problems and the developers are fucking morons.
Click to expand...

I don't think it's their fault. They don't strike me as dumb assholes.
Most likely the publisher just didn't like the numbers and don't wanna "waste" more money on proper support and new content (aka something that wasn't actually developed before the game was release and cut out to sell it as DLC down the road). Same thing happend to F13th, tho in that case Illfonic simply left and GunMedia hired two or three Japanese students for "support".
Last edited: Tuesday at 5:26 AM
You must log in or register to reply here.
Share:
Facebook Twitter Reddit Pinterest Email Share Link
Top